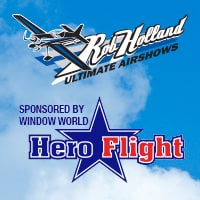 Youngstown, OH, May 28th, 2015 – Window World of Youngstown will honor a local veteran through the extraordinary Hero Flight Program, an aspect of the Window World® and Rob Holland Ultimate Airshows partnership, at the Westmoreland County Air Show in Latrobe, PA June 20th – 21st, 2015.

As a tribute to veterans nationwide, a service member is being picked from nominations to participate in the Hero Flight Program in each city in which pilot Rob Holland performs during the 2015 season. To be eligible, a nominee must have served active duty in the US Military and be in good physical condition.

Nominations will be accepted through Friday, June 12th at 11:59 PM EST. The link to apply can be found here. Rob Holland, a four-time U.S. national champion and three-time world gold medalist aerobatic pilot, brings an unrivaled performance to the sky. His stimulating, world-class maneuvers keep millions of people marveling over his nonstop, action-packed shows.

Window World is the primary sponsor of Rob Holland Ultimate Airshows this year, during which he will perform in over 20 premiere airshows across the country. “I am so excited to partner with Window World for the 2015 airshow season,” said Holland. “It is an honor to represent a company with such a great sense of family and commitment to customer service.”

To learn more about the Rob Holland Ultimate Airshows schedule, visit https://www.ultimateairshows.com/. Visit Window World of Youngstown at 5350 Transportation Blvd #7 in the Robinson Square Plaza to view our full line of products and services offered.

Links To View Past Hero Flights in Other Locations:
http://www.wtoc.com/clip/11373965/veteran-goes-on-hero-flight-in-beaufort